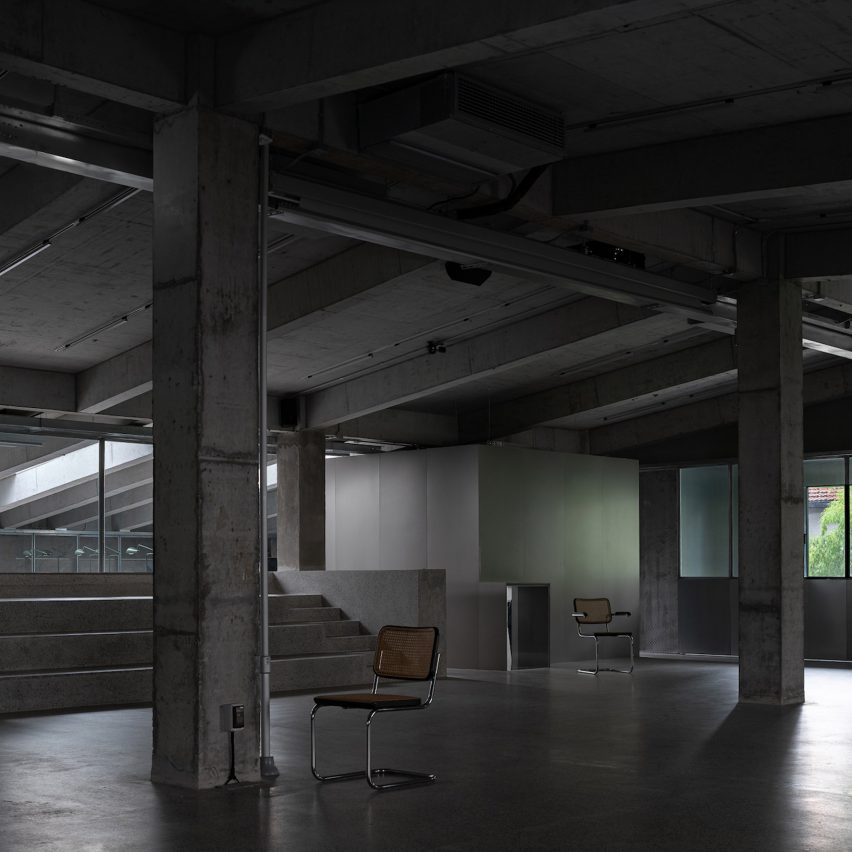 The Shanghai-based studio stripped back the 529-square-metre space, located on the second floor of a factory building within a former industrial campus, by removing numerous layers of previous renovations.

The concrete structure of the building was left exposed throughout with a number of columns breaking up a large multi-use space at the centre of the office.

Large steps within this space can be used as seating for presentations with a hidden projector placed in the roof.

Two stainless-steel structures enclose meeting rooms alongside this main space, while private offices are arranged alongside it.

A room with stainless-steel desks, which is lit by six pre-existing skylights in the sloping roof, stretches along one edge of the room.

“With the strength of the building’s original character revealed, any additions to the space were carefully applied in layers that allow what is behind to coexist, inhabiting the liminal space between past and present,” explained the studio.

The studio used “nomad” as the design concept, based on the client’s request for flexible working spaces.

Spaces were designed so that they can serve multiple functions, with several sliding doors created to provide flexibility and allow the company to alter the workspace dependent on future needs. 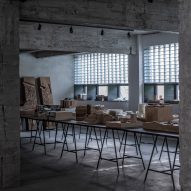 “Much like the itinerant populations that move between cities to offer specialized services, the people working for and with this agency needed their spaces to transform according to various scenarios,” said the studio.

Stainless steel and frosted glass were widely used throughout the space to contrast the concrete structure and reflect the changing usage. Galvanized steel and mesh were selected as they will change colour over time.

Neri&Hu’s other recent projects include a courtyard house in Singapore and a guesthouse wrapped in metal mesh in Shenzhen.

The photography is by Zhu Runzi.