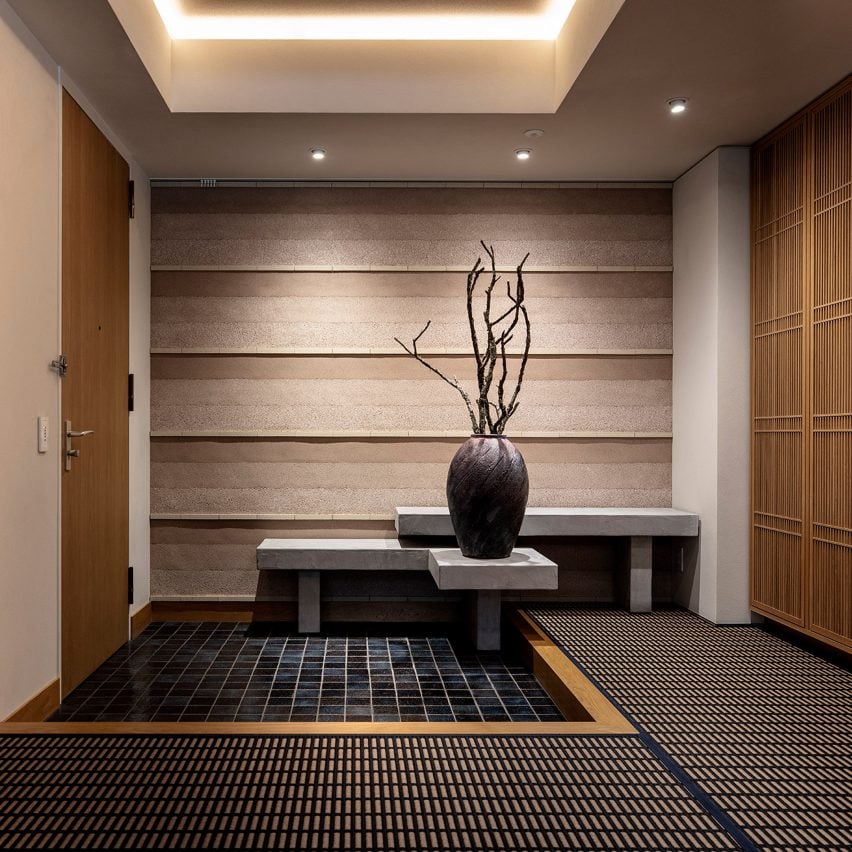 Copenhagen-based OEO Studio combined muted colours and textured materials to create the interiors for this renovated Tokyo apartment that is characterised by its Japandi design.

Located within the Opus Arisugawa housing complex in central Tokyo, the apartment’s interior was renovated to combine design influences from Japan and Scandinavia – a trend known as Japandi.

OEO Studio intended to create a serene atmosphere by adopting minimalist interior design and mainly natural materials throughout, both of which are hallmarks of the Japandi style.

The apartment’s entryway includes a rammed-earth wall surrounded by a slatted rectilinear wardrobe that was custom-made in calming honey-hued wood.

Low-slung concrete seating is also built into the hallway, which doubles as a sculptural plinth for a ceramic vase by Christian Bruun.

A mixture of deep indigo tiles and paper yarn rugs made from Finnish birch but embroidered with Japanese textile-style patterns cover the floors.

“The interiors reflect the studio’s cross-pollination of Japanese and Scandinavian design ideas, drawing inspiration from both cultures and reinterpreting them in new ways,” said the firm.

The hallway leads to an open-plan living room filled with interiors in neutral tones, including cool stone floors and sleek furniture finished in smoked oak, oiled pinewood and soft wool. 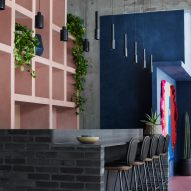 Japanese Ōya stone was used for the columns that divide the living area and brightly lit kitchen, which includes tactile wooden cabinetry.

A minimal dining space with black-stained ash chairs also features alongside the kitchen.

The apartment’s three bedrooms also have a mixture of refined textures and shapes, while the singular pared-back bathroom features a statement wooden bathtub at its centre.

“We worked carefully with the zoning and the transitions between the rooms in the apartment to create an evocative yet calm, welcoming and comfortable atmosphere,” said OEO Studio.

Founded in 2003, OEO Studio has created a number of similar projects including a Tokyo restaurant that references both Danish carpentry and Japanese gardens in its design.

The firm recently created a cafe and shop at Designmuseum Denmark that pays homage to architect Kaare Klint’s original design.

The photography is by Michinori Aoki.