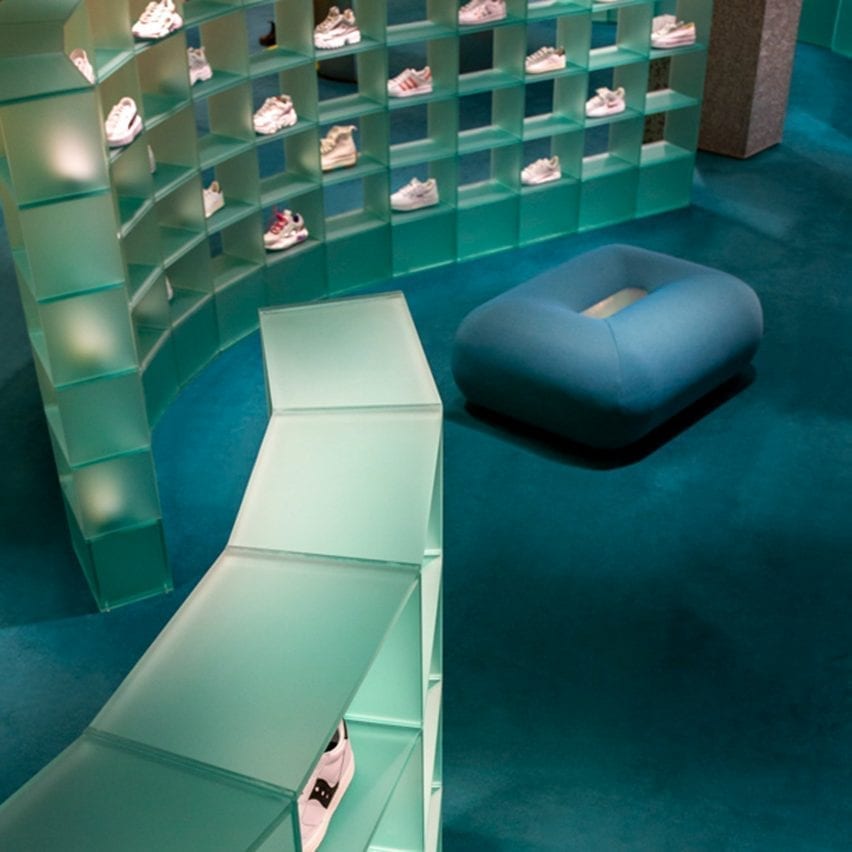 The fourth floor, which is home to the store’s womenswear department, has been reimagined by the Milanese studio using bold graphic elements and pop colours.

Studiopepe, founded in Milan in 2006 by Arianna Lelli Mami and Chiara Di Pinto, conceived the space as a series of zones subtly organised by functions and visual references.

1980s Milanese workplaces as well as the city’s rationalist M1 metro stations – the latter designed in 1964 by Italian architects Franco Albini and Franca Helg – were among the studio’s inspirations.

“The use of graphic elements and pop tones echoing Milan street style convey a new genderless approach to retail design,” explained the studio.

“Colour is conceived as an architectural tool – an intense emerald green, silver and black create an unusual palette animated by hints of coral and bright yellow tones.”

The steel tubes – which are used to clad display columns and create table legs – are a direct reference to the city’s underground stations.

Materials such as satin steel, plexiglass and terrazzo are paired with experimental materials with contrasting textures such as Silipol – a material which was originally selected by Albini and Helg to cover the Metro stations’ walls; Alusion, the stabilised aluminium foam that is used to clad the city’s Fondazione Prada; and Milleform, a bio-based cotton acoustic tile.

To create a domestic feel, the space is furnished with a mix of bespoke rounded furniture and display cabinets, as well as classic design pieces like the Boomerang armchair by Rodolfo Bonetto.

The department’s distinctive circular changing rooms are enclosed in orange curtains made from structured leather – a feature that Studiopepe said nods to the textile folding doors often used by Italian architect Gio Ponti.

A previous incarnation of La Rinascente’s fourth-floor womenswear department was designed by Japanese studio Nendo. Designed in 2013, the studio drew upon architectural elements observed while exploring Milan, to create a calming, neutral space.

The studio said that it was “inspired by the unexpected encounters with shop windows, courtyard gardens and public squares that come from wandering Milan’s back streets”.