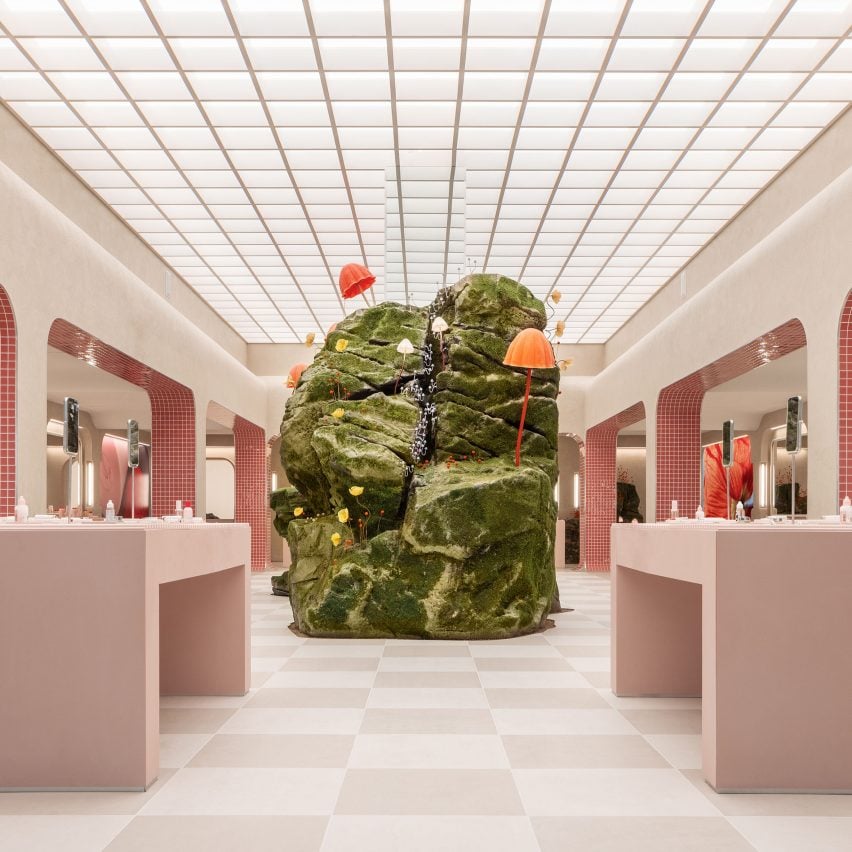 A pink furry fashion boutique, a cosmetics store styled like a 1970s office and a streetwear outlet adorned with a chandelier of Nike trainers feature in this roundup of weird and wonderful retail interiors.

The past year has seen a growing trend for over-the-top shop interiors, from stores containing surreal sculptures and installations to those masquerading as something else entirely.

Below are 10 unusual retail spaces recently covered on Dezeen:

Designer fashion label Balenciaga has temporarily covered its Mount Street store in London with fluffy bright pink faux fur to celebrate its Le Cagole bag and launch a collection of accessories and shoes.

The maximalist look is intended to match the Le Cagole identity, which takes its name from French slang for an “over-the-top attitude”.

These include a 12-foot version of the Bala Beam weight propped against a mirrored wall and an oversized ankle weight forming a squishy leather seat.

Marijuana store chain Superette bases its shops on nostalgic retail environments, and for this outlet in the Annex neighbourhood of Toronto its in-house design team took cues from a classic Italian deli.

The cannabis dispensary‘s lime-green walls, tomato-red stools and checkerboard floor were intended to create a “convivial spirit” in a bid to appeal to the area’s student population.

Shanghai studio AIM Architecture transformed the second floor of a business park in the Chinese city of Hangzhou into a cosmetics store resembling a 1970s office for Harmay.

The brand’s perfumes and make-up products are displayed in rows of yellow desks, on phoney bookshelves and on boardroom tables hidden behind frosted-glass “meeting room” doors.

This skincare store, also in Hangzhou, was designed for Formoral by interiors studio Lialawlab on a theme of retro-futurism – meaning the future as envisioned in the past.

With its spherical gateway, limited palette and otherworldly lighting, the space was likened to a “desert planet” by Lialawlab’s chief designer, Liya Xing.

Spatial designer and artist Adi Goodrich filled the Dreams lifestyle store in Los Angeles‘ Atwater Village with surrealist details such as a lobster phone that references a Salvador Dalí artwork.

A large Klein-blue rock sculpture covered in non-reflective paint provides the focal point and adds to the interior’s dreamlike feel.

Find about more about the Dreams store in Los Angeles ›

It added two ceiling installations made with casts of white Nike sneakers, one lining the barrel-vaulted ceiling at the shop’s entrance and the other arranged to replicate a teardrop chandelier.

With curved walls, mirrored surfaces and faux stone, this flagship store in Beijing for aromatherapy brand ToSummer was designed to be reminiscent of a cave.

“We chose not to directly create the natural appearance of caves but, instead, present the characteristic elements of material textures to inspire the sensory experience,” explained Chinese studio F.O.G. Architecture, which created the space.

The shop features light fixtures inspired by James Turrell artworks, a circular golden changing room and two giant stones taken from the Palm Springs desert balanced on top of one another in front of full-height muslin curtains.

Beauty brand Glossier is known for the playful, pastel-coloured interiors created by its in-house design team at its physical outlets.

At the centre of this store in Seattle is a sculpture of a large boulder covered in moss and colourful mushrooms, surrounded by contrasting pale-pink furniture.